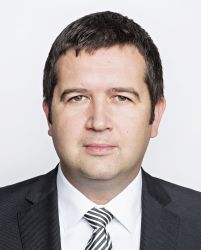 Welcome to the website of the lower chamber of the Czech Parliament!

Here you will find information about the work of our chamber and of our individual deputies.

It is my goal to ensure, as much as possible, that the Chamber of Deputies is open and accessible to the public. It is also my hope that each citizen should be fully informed and aware of how laws are adopted in practice and how other parliamentary decisions, which impact the life of our citizens and of our country, are made by deputies.

Mr Hamacek and his wife, Kamila, have two sons.